All pictures posted here are courtesy of Steve Bisig at PNW Backroad Adventures. Special thanks to Jerry at Backroads Drivers Northwest for leading this outing. For a detail trip report, visit Steve’s writeup. 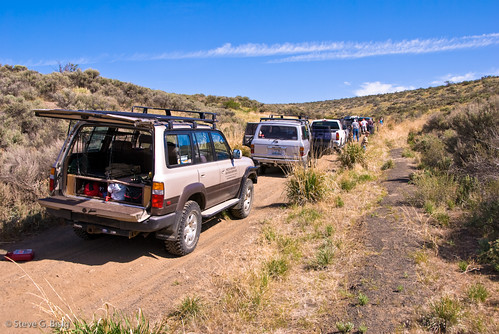 It was the hottest day yet this spring and we were headed from Yakima to Kittitas, WA to meet up with the caravan of vehicles heading to the “trail head”. It was suppose to reach 90 deg so I stopped and filled up with cold drinks as well as fuel before heading off the black top. Just as we approached the Old Vantage Highway, I saw a long line of 4wheel drives heading east. We fell quickly in line as the 10th vehicle. Jerry, our intrepid leader turned off onto the Corral Whiskey Dick Road. This is the southern entry point into the Whiskey Dick Road Managment Area, managed by the Washington Department of Fish and Wildlife. 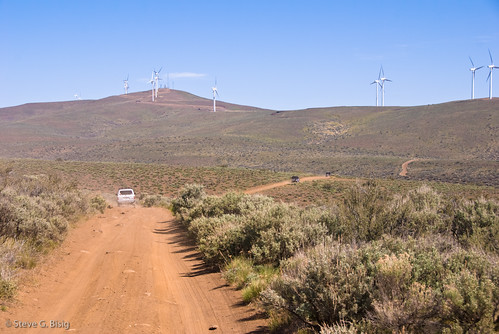 This area is mostly accessible by 4wheel drive. High clearance is not required but good tires and a supple suspension will make for a nicer day. On this trip there were three Jeep Wranglers, two Ford Explorers, two Toyota Land Cruisers, one Ford offroad conversion camper Van, a newer Chevy Pickup and one older Jeep wagon.

Heading up the hill you can see the Wild Horse Wind facility operated by PSE. We remained to the east of this facility but could see it as we rose to each of the ridges. It was turning out to be a hot and dusty day. Many of our fellow overlanders were along to photograph the flowing plants of the scrub steps, including the hedgehog cactus. We continued along the road over many hills and into valley after valley, many having natural springs and signs of early settlers attempts at home steading and ranching. 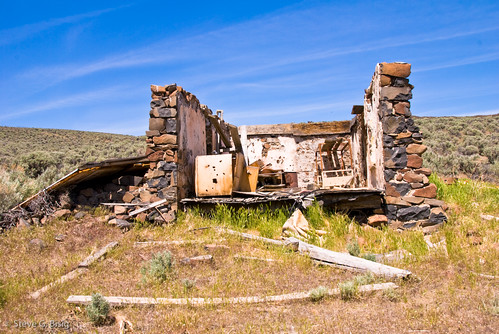 After making it north to the Quilomene Ridge Road, we headed west for our last leg of the trip. Unfortunately Jerry started having a problem with his ’76 Jeep Wagon. It was acting as though he was out of gas on the uphill sections, despite showing half full (later proving true with only 20 gallons going into the 40 gallon tank). He had to keep it in low range and the peddle down to have enough power to make it up the hill. Flats and down hills were not a problem however. At our highest point we ran into patches of snow lingering from the winter. We had to cross a series of these to get the rest of the way out. There did not appear to be any other tracks in the snow here. Then we were onto the Colockum road down to the Kittitas valley and into Ellensburg.

Here is a 12 minute “clip” of our trip. Thanks to every one how came along and made this a fun first “back country” drive for my son.

NW Source hike of the week